Windows 11 is coming: what you need to know

As announced in late June, Windows 11 is expected to be released later this year (possibly as early as October, 2021) .

Meanwhile, Windows 10 support is scheduled to end in October of 2025 (which has always been the planned life cycle end date by Microsoft for Windows 10).

The interface is similar to Windows 10 involving a mashup of Chrome OS and Mac OS in appearance. 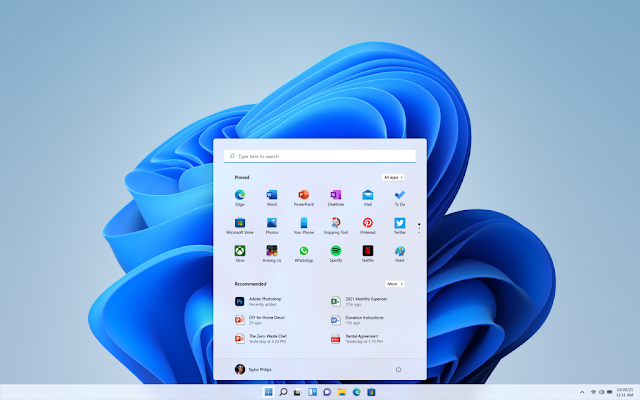 The important thing about this update however is not aesthetics nor new "app" options but rather a significant shift in how security is handled, i.e. hardware enforced security.  But that's where currently there are questions in what will be supported and whether your current PC may be able to update to this newer operating system.  (Updates from Windows 10 to Windows 11 on compatible PC's are expected to be free.)

General requirements are outlined as follows:

The critical consideration is what type of chip is installed in your computer. The new hardware enforced security relies on trusted platform modules (TPM).   New PC's purchased since 2016 should have some TPM version included.  However Windows 11 may require a high level of TPM that has only been included with even more recently purchased new PC's.   In essence, Intel's 8th generation processors  that didn't start to be generally be available until late in 2017 may represent the minimum for upgradeable PC's (although that could change by the time Windows 11 is released).

So for example, if you acquired a Surface Pro in 2017, it most likely has a 7th generation chip that won't be compatible.

PC's however with generation 6, 7 or 8 processors running Windows 10 may nonethless be able to take advantage of the new security features as along as they have been fully updated to the October 2020 Windows 10 update.  On those devices, you simply need to turn device security on in the BIOS, and you will have the same enhanced hardware security features offered by Windows 11, and so you won't have to worry about Windows 11 compatibility (until October 2025 when Windows 10 support ends) even if it has an older CPU.

For PC's with even older processors running Windows 10, add-on chips for desktop PC's may be available to support the hardware enforced security.

Your new PC purchases going forward should involve the latest generation of CPU processors to ensure potential compatibility with Windows 11 (and also until the dust settles as to what exactly will and won't be supported).

Note that Windows 11 only supports 64-bit processors.  If you are running a PC with a 32-bit processor (as some of our users are to support legacy applications), you will not be able to upgrade your current PC to Windows 11.  Note also however that 32-bit applications are all still expected to run under Windows 11 exactly as they have been running under Windows 10 with 64-bit processors (by far the most common configuration).   Accordingly we are not expecting any problems with TAS Professional 6, TAS Professional 7, TAS Premier 7i nor the recently released 7ix runtime systems, including applications based on those versions (Advanced Accounting 6, 7i and 8 for example) to have any problems migrating ultimately to Windows 11.  Our preference however is always to wait until the first major update of any new operating system before planning a migration to that new version.