We are pleased to announce the next release in the TAS Premier 7i series.
This release perhaps could have been referenced as TAS Premier "8" but that would have led to changes in executable names, documentation files, etc. and so for simplicity and to make it easier for users to update to this next release, we decided to retain the existing executable names, icons, help files, etc. referring to this instead as release 16 in the TAS Premier 7i series.  In light of some of the significant features relating to exporting data and other enhancements, however, we are also now referring to development system as the TAS Premier 7ix version.
Releases 14 and 15 both came out in 2019.   Not long after the October 31, 2019 publication of release 15, we added support for QR codes, first in a private/custom standalone executable where it was needed but then we added it to the development system/runtime environment and since then we have continued to make changes and updates to the system that are finally now being released.
The new QRCODE() function can create images (which can then be picked up on the fly in reports, for example, as with any image file).  QR code technology was first developed in 1994 but widespread use came much later.   We first looked at generating them in 2012 but did not have anyone expressing a need for them; that did not happen until late in 2019.   Because of how much information that can be stored in a QR code compared to say a conventional bar code, they seemingly could be used in many inventory type applications.
There are different versions of QR codes.  The most standard type, Module or Version 2, is what we are supporting starting with the TAS Premier 7ix release 16.  The amount of information that can be included depends on the type of characters (string vs. numeric) and also based on the margin and pixel size of the generated image.  While some sources indicate that they can hold  up to roughly 4,000 characters of text, or about 7,000 numeric characters, in our tests we were able to generate a maximum size of 2,930 characters using a margin size of 4 with a pixel size of 75.  Readability of the code and the intended distance from which it may be read are other factors to consider in the design of a QR code.  If the code will be read by a smart phone, the code should be limited to fewer overall characters (under 300).   For smart phone readability, they should not be smaller than 1" x 1" and equal to at least 1/10th the desired scanning distance.
More recently we have added export features such as EXPORTGRID() that exports current visible rows of the TTASDataGrid object (a string grid descendant) into a great number of other file types including XLSX.  This feature has been added to the Maintain Database and Maintain Data DIctionary options as well.
Two new utilities include an option that can Read XLS or XLSX files into a string grid that also includes a number of output options similar to EXPORTGRID() as well as a utility option that can load a delimited text file into a string grid and that also has the same export output capabilities.  These utilities can be used in runtime environments even though they are not currently embedded into the runtime engine.  The Read XLS/XLSX option can even be used to automatically convert and XLS files to the XLSX format without end user interaction. We intend to add more options like these in future releases.  We have also been using custom modified versions of these tools to meet specific customer requests.
Some 14 pages of additional documentation have been added (the PDF version of the help file is now up to 794 pages) in connection with both new and existing capabilities of the development system.  The report designer now has a separate end user document tied to it which can be substituted with a similarly named PDF  allowing it to be branded/customized for use with a specific runtime system.  The provided PDF however contains information that may help end users in making with aesthetic changes to reports and/or may be of interest to developers, and is in addition to the normal help files provided with the development system.
See the "Addsum Premier 7i features" under the topic "What's new in TAS Premier 7i" in the help files for more information as to all of the updates provided in this release.
Future releases of Advanced Accounting 8 will use the 7ix runtime.
TAS Premier updates
TAS Premier 7ix download (new installs) 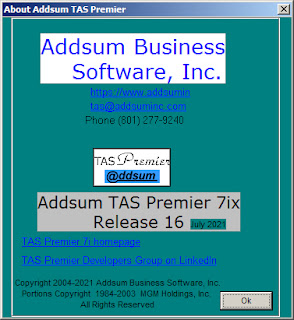