The first release of TAS Premier 7i was in 2005.  Since then we have usually released an annual update related to cumulative improvements since the prior release.  This release then marks now some thirteen years in updates in the 7i series.  TAS Premier 7i was in turn based on our 2004 release of TAS Professional 7, building on prior versions released by Business Tools, Inc. including TAS Professional 6. 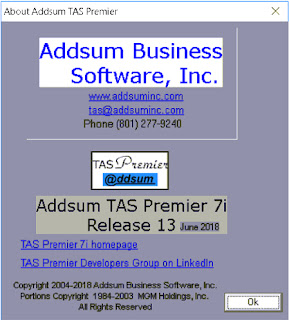 Releases 11, 12 and 13 taken together could have justified a new version altogether, i.e. a TAS Premier "8," but we have so far decided to simply continue to number these updates sequentially within the 7i series.

The next major release of Advanced Accounting will be based on this release.   Several of our users requiring some of the new features included in rel. 13 have already been using the underlying runtime engine for many months. Enhancements and other fixes and updates have been actively made since release 12, i.e. since mid-November 2017 to the present.

Release 12 made some major changes the full impact of which could not all be fully contemplated until it was more widely tested and deployed at end user sites.   Release 13 resolves the several remaining issues that we became aware of, and provides additional features to deal with the "topmost" behavior which we had to migrate towards in order to solve other problems and to keep up with operating system changes in rel. 12.

One of the issues that surfaced in rel. 12 that rel. 13 resolves relates to the folder lookup when printing to a file that would fall behind the printer dialog box.  Resolving that required a new API call and subsequent extended open file dialog support.  This led us to also incorporate separate but similar calls incorporated within GET_FILES() and GET_RUN_PRG()  so that they could work without having to adjust the Z-order of the calling form in advance (which could be problematic if multiple prior topmost forms were loaded).  These now also have extended file open dialog support.


A new feature when printing a report and selecting print to file is that the file type last chosen in a runtime session is "remembered" and used as the default in the next request. This feature was responsive to a request by an accounting software user who would at month's end need to send multiple reports to an outside account via PDF and avoids having to scroll the file type drop down box with each and every print to file request.

Another new function calls external executables in a Windows "CreateProcess" thread and has the ability to wait before relinquishing control to the calling program, and it also attempt to make the executable that is called topmost.   It is sort of a cross between the existing EXEC command and the TShellExe object. 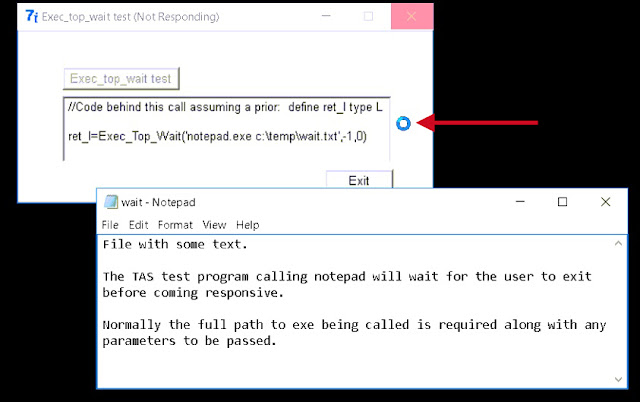 A significant amount of attention has been also given in this release to help file support.  The WHELP command (as well as F1 form key presses) now attempts to load CHM (Microsoft's proprietary compiled HTML format) files topmost.  Because of the increasing uselessness of the CHM format, we have brought back HLP support for newer operating systems.  The HLP format is actually in many ways more feature-rich than CHM and does not suffer from the blocking problems that have evolved with that format even though it is still the Microsoft standard.