MSN messenger service going the way of the Dodo

Since the April 2013 retirement of  MSN messenger, also referred to as the Microsoft Messenger or as the Windows Live messenger (see announcement at http://windows.microsoft.com/en-us/messenger/messenger-to-skype), it is remarkable that problems with MSN messenger live.com accounts have not occurred in a more widespread fashion sooner than now.

But sometime just in the past ten days or so, we noticed that our live.com account was no longer connecting via Zoho Chat.   We thought that maybe something had changed there or that we had installed something that was preventing the connection.  In Zoho Chat, it simply attempts to connect with the message 'Connecting . . . ' which remains on screen indefinitely with no error message or any indication as to what the issue is, nor any indication of a sign-in failure. 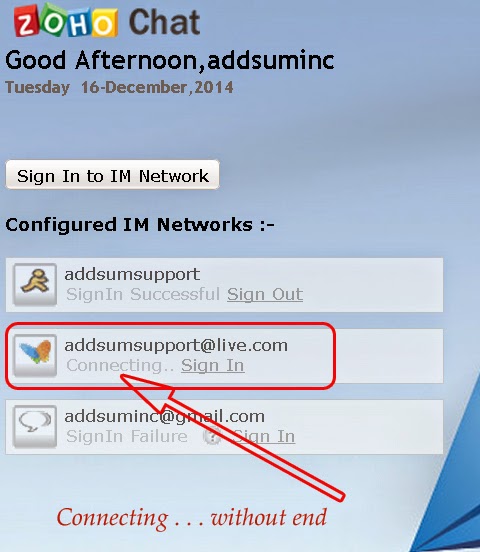 We had no difficulties logging into live.com which simply accesses browser-based mail.   We tried disabling/enabling the Zoho Chat settings with no change.

Proceeding to reinstall the latest version of a desktop instant messaging (IM) client we used to use, Pidgin, we still could not connect to the live.com account getting sometimes a "connection refused by server" response.

Investigating further, we finally stumbled on these helpful postings:

We tried linking a new live.com account using WLM protocol (instead of MSN protocol, and after installing the "msn-pecan" protocol - see first link above for the link and as recommended there) and that did not work, but then noticed the more recent indication that the HTTP method had to also be used.   That also did not seem to work;  we then changed the Server setting per one of the other recommendations to bn1.gateway.messenger.live.com.  The connection still did not at first seem to work, but shortly thereafter, and only after all of the foregoing changes, and for perhaps what will last for only a short period of time, we appear to have our "live.com" connection temporarily back (which we have used solely to communicate with a single customer that historically has used it)!

The MSN messenger service does appear to be on life support.


Postcript:  the day following, a connection via Pidgin could again not be established.  In the intervening period,  Microsoft made a change that required HTTPS that Pidgin does not currently support.  More details.

For connectivity with Pidgin, changing the server (with or without the HTTP method checked) to msn.messengergeek.com did not work for us on the 18th but as of the 19th was working again. But for how long this time?!